Do you work in the press or media?

The information on this page is intended for journalists, press and media. Click YES to get to the newsroom. If you click NO you will come back to Mynewsdesk.com.

Electric cars have come to stay. Most recently, news from Norway tells that 50 % of all new cars sold in 2019 will be electric cars. Falck has more than 5000 vehicles around the world, but very few are powered by electricity, as many of the tasks within rescue and fire services require a lot of power, which is inconsistent with the limited battery of an electric car. It has not stopped Falck. The company has now developed its own electric ambulance.

“In Falck we wish to use less fuel. It is beneficial both for the environment and the economy, and since no one else in the world has made an electric ambulance, we have had to develop one ourselves,” says Jakob Riis, CEO of Falck.

Separate power and heating
The challenge has been that an ambulance uses power for much more than just driving, and therefore it uses the car's battery. It is crucial to solve this, so the patient is safe during transportation and is sure to reach the hospital.

”We drive with a separate power system in the car, which means that all equipment is operated without using the car's own battery. Emergency lights and sound, radio, medical equipment and cooling/heating equipment run in a closed system which is charged at departure, while a Fuel Cell recharges while driving and staying outside the garage,” explains Jakob Riis.

A heating unit is also fitted. This too is independent of the car's power system. It is a "Self-Powered Heater" that uses a little fuel like methanol and thereby the car can always be kept warm.

”So even on frosty winter days on the highway, where the EMT must wait for the rescue team to release a patient from a car, before he can be loaded into the ambulance, we can guarantee that a warm car is ready for the patient. This is a very important element in the electric ambulances of the future,” says Jakob Riis.

Falck is at the forefront of using this heat source, which automakers will not use until a later date.

The world wants electric cars
In Falck innovating ambulances is part of everyday business, and therefore it is normal to develop e.g. an electric ambulance. Furthermore, customers require both innovation and sustainability. Soon the first electric cars for patient transport will be driving around Copenhagen because of an agreement with the Capital Region.

“I expect to see more of this in ambulance tenders, too. And we will be better prepared than anyone else. We have the desire and duty to develop the ambulance services and I am pleased that we already have the first electric car in operation,” says Jakob Riis.

“It is being tested in real-life emergency driving with rapid acceleration and hard braking and it has never been done before. We are testing it and beginning the development of an ambulance for lying patient transport at the same time”.

The test car runs in the ambulance service in the Region of Southern Denmark. 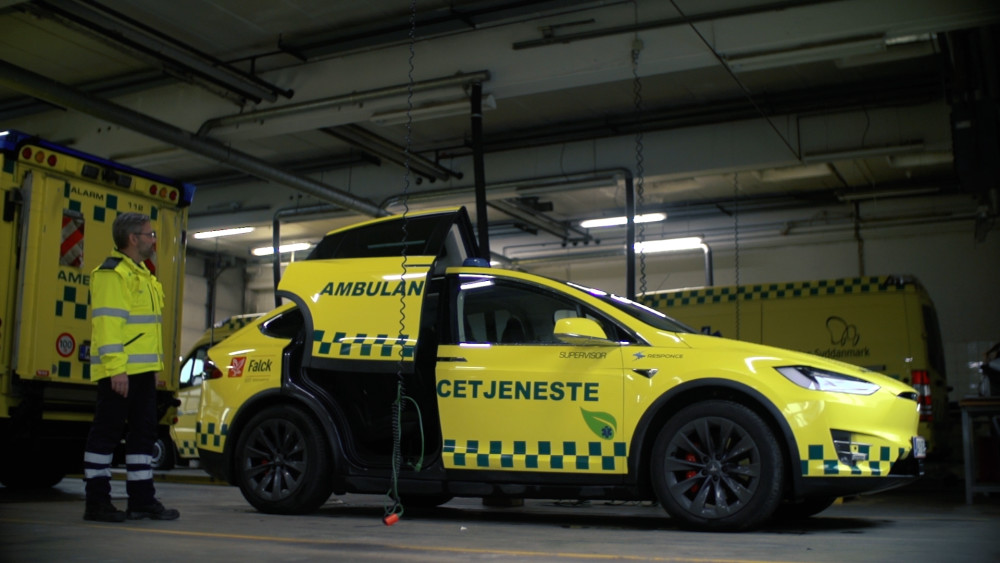 Falck is a leading international provider of ambulance and healthcare services. For more than a century, Falck has worked with local and national governments to prevent accidents, diseases and emergency situations, to rescue and assist people in emergencies quickly and competently and to rehabilitate people after illness or injury.

Falck operates in 35 countries and has more than 32,000 employees.

​Green driving is an essential element when planning Falck's more than 5,000 vehicles, and electric cars are a natural part of that development

For more than a century, Falck has worked with local and national governments to prevent accidents, diseases and emergency situations, to rescue and assist people in emergencies quickly and competently and to rehabilitate people after illness or injury. This has made Falck an international leader in emergency response and healthcare services.

Falck operates in 30 countries and has approximately 27,000 employees.