Falck’s legal advisors disagree that the company has violated competition rules. Despite that, Falck apologises for having failed to live up to its own standards and the expectations of society.

“Parts of the DCCA’s interpretation of the matter are quite embarrassing for us. In some instances, our conduct was such that we failed to live up to both our own standards and the standards expected of Falck by society in general, and for that, I wish to apologise,” says Falck CEO Jacob Riis. He continues:

“We were too intent on finding information about BIOS. We were too eager to share information about a competitor with journalists who were also doing research on BIOS. In several instances, we shared information in ways that did not clearly identify Falck as a contributing source. Knowing what we know today, we should clearly not have become involved. Falck’s former management acknowledged in 2016 that we certainly regret some of the things we commented on and wrote about, and I entirely agree.We would certainly never want to be in such a situation again,” says Mr Riis.

Specifically, Falck collected information about BIOS on its own and through a Dutch journalist and also assisted journalists doing research on the Dutch company winning the contract for the Southern Denmark Region. In addition, Falck mobilised ambassadors and assisted employees in setting up a Facebook group and arranging a demonstration. According to the DCCA, those activities were intended to reinforce already existing doubts as to whether BIOS would be capable of providing ambulance services in the Southern Denmark Region, and whether the regional authorities had a plan for how to respond, if BIOS proved unable to deliver services under the contract.

“The documents in the case show that Falck were careful to share only information that was correct and documentable by anyone. I doubt whether our actions in the matter would, in themselves, have prevented a competitor from setting up in the market, but that does not change the fact that we should never have become involved in the first place. We did not behave appropriately towards our clients and the other players in the market,” says Mr Riis.

“Falck operates in a global market, and competition is a prerequisite for us, as a business, to be able to win new contracts. We have no divine right to provide ambulance services in any market. We can only win contracts by being competitive and by developing our pre-hospital and other healthcare services in collaboration with our clients. That is our approach today in our European, US and Latin American markets. Thus, we rely ourselves on an efficient competitive environment.”

“It is quite clear today that we should simply have moved on when we lost the tender for the Southern Denmark Region. We didn’t, and we’re the first to regret that. This matter casts a shadow over the excellent work our employees perform every day of the week,” Mr Riis concludes.

Briefly about the case: Three-year investigation may bring the matter before the courts

Over the past three years, the Danish Competition and Consumer Authority (DCCA) has been conducting an investigation to establish whether Falck abused its market position in connection with the tender for ambulance services in the Southern Denmark Region in 2014.

The investigation was triggered by a complaint from the competing company, BIOS.

The statement of objections represents the DCCA’s preliminary conclusions in the matter, which will be brought before Denmark’s Competition Council next year. The documents to be submitted to the council include a consultation response provided by Falck.

If the Competition Council accepts the statement of objections, it will be for the courts to decide whether or not Falck acted within the rules.

Jacob Riis explains: “A lot has happened in the four years since this matter unfolded. Nevertheless, we intend to appeal if the Competition Council does not rule in our favour. Some of the things we commented on and wrote about in this matter are quite embarrassing, but our advisers do not believe that we violated competition legislation. The matter may result in lawsuits against Falck and it may also be of general public importance, because the Competition Council has extended the application of the Danish Competition Act. This is common procedure and our advisers also recommend that a matter such as this should be decided through the courts.”

Falck is an international leader in the ambulance and healthcare markets. With more than 100 years of experience, Falck works together with local and national authorities to prevent accidents, illness and emergency situations, to rescue and assist people in emergencies quickly and competently and to rehabilitate people after illness and injury.

Falck operates in 35 countries and has more than 37,300 employees. 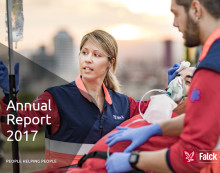