Do you work in the press or media?

The information on this page is intended for journalists, press and media. Click YES to get to the newsroom. If you click NO you will come back to Mynewsdesk.com.

”The H1 2017 results are not satisfactory. We must increase our profitability considerably and ensure

stable revenue growth going forward. We are in the process of systematically examining the business and are expecting to complete our analysis and the strategy process sometime during the autumn of 2017.

Since taking office, I have spent my time at Falck going around visiting our different divisions and

getting to know and understand the business. Falck is a company with unique strengths, dedicated employees and fantastic growth potential. But our business is commercially complex and we need to simplify and gain efficiencies over the next 12-18 months. It is crucial for us to establish a strong foundation for a sound and robust business so that we can invest in the innovation and new technologies which will form the basis of a profitable growth in future.”

20% of our revenue in Emergency is from the US business, and Falck therefore has exposure to the

developments in the US healthcare system. The market is undergoing huge changes these years and particularly the US payer environment has become more challenging. In this connection,

management has analysed Falck’s accounts receivables in Q2 and reassessed the valuation of those receivables to the effect that they have been written down by DKK 282 million.

Similarly, management has tested the carrying amount of a new customer management system in

Assistance, which has turned out to be DKK 100 million more expensive to develop than initially

assumed. The value has been written down by those DKK 100 million.

The first half of 2017 confirmed the growth potential of three healthcare-related areas:

▪ Emergency was awarded a new contract with Los Angeles County in the month of June, starting

1 July 2017. The contract will increase the number of ambulances in Los Angeles by 55, which

means that the total number is now 157 ambulances.

▪ In Nordic Healthcare, growth has taken place in particular within diagnostics and

employees and customers will have the necessary assistance if they fall sick while abroad.

assistance programmes offered by car manufacturers.
▪ The still low level of activity in the oil and gas industry in the offshore market affects the need for training within Safety Services.
On 1 May 2017, Jakob Riis joined Falck as President and CEO and on 1 September 2017 Tor Magne Lønnum will take up the position as our new CFO and member of the Executive Management Board. 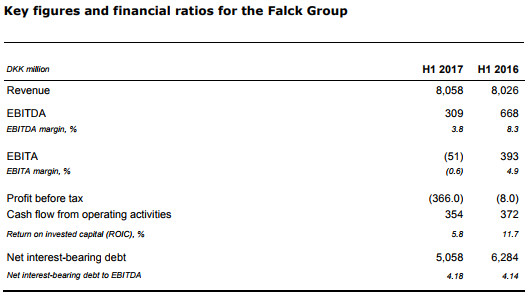 For more than a century, Falck has worked with local and national governments to prevent accidents, diseases and emergency situations, to rescue and assist people in emergencies quickly and competently and to rehabilitate people after illness or injury. This has made Falck an international leader in emergency response and healthcare services.

Falck operates in 30 countries and has approximately 27,000 employees.