The city of Cologne has awarded Falck the ambulance contract for lot number two, which operates out of Marienburg in southern Cologne. This lot is one out of ten ambulance lots, which was tendered in Cologne.

From February 2018 and onwards, Falck will supply two additional ambulances.

The contract with the city of Cologne runs until October 2019 and has an option for extension until 2020.

- We were awarded the tender in mid-September and successfully began operations in early October, says managing director of Falck Germany, Lars Tue Toftild.

- Due to this very limited implementation time, we initially mobilized and deployed colleagues from other parts of our German operation to assist our local staff. The successful implementation shows the importance of our scale and the synergy we are able to achieve with very short notice, he says.

​Falck has been awarded the operation of nontransporting EMS vehicles in the entire western part of the Central Denmark Government Region on the Jutland peninsula. 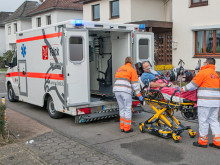 From July 1, 2018, Falck will provide emergency rescue and ambulance services in Bonn. Falck won the contract in Bonn in a Europe-wide tender.